After four months of not celebrating sabbats at all, due to being heavily pregnant and then exhausted with recovery and everything else that comes along with the early weeks of baby rearing, my spiritual practice and the craft were fleeting dreams. But at Bealtaine I finally had the right mix of things in order to actual perform ritual and get into the spirit of things: a well-fed, great sleeping baby, and a father who was more than happy to take her from me and give me the much needed time to get into things. It was heavenly, and the fact that I reserved my Bealtaine practice for the full moon only a couple days after the actual sabbat day meant that I had a lot of other wicked, divine and sumptuous energies in the mix too. 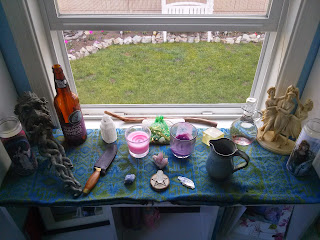 This particular didn't go up until a few days ago, but the altar I had for the actual ritual wasn't half bad either. I felt the energies of the sun and the God surge into me, giving me the motivation and the drive to move past some things that have been bothering me, and getting me excited for the summer, and times ahead. I feel revitalized, energized, and like I've hit the ground running. There was so much I wanted to do this year, and so much of it is getting DONE.

Bealtaine has also marked a return to the craft for me. While the beginnings of this realization that I wanted to practice The Craft (as I call it, I'm not crazy about the word witch, so I say The Craft and I call myself a Wise Woman, or a Wise One, as I think it better reflects who I am and what I do) came about around Samhain and Yule, they didn't really start to come to the surface and be fully formed ideas until now. Which kind of makes sense if you think about it... all the Sabbats past Yule up to Litha are basically about the earth waking up and becoming richer and more full of life, and that's the pattern that my development with the Craft have taken shape as well. This marked the first full on ritual I have practiced in a long time, complete with casting a circle to create sacred space, meditation, devotions, and even casting a spell and observing and honoring the Full Moon. It felt so wonderful to practice again, and I really felt then, and still do now, that I was coming more into my own.

This has led to a fresh wave of information gathering of course... I've been pinning amazing ideas and the like onto my boards on Pinterest, I've been watching a lot of videos on YouTube about the Craft, and of course, websites and books are being consulted on a weekly basis. It's taken me a very long time to be honest with myself about what I believe, and becoming unashamed about owning them, and now that I've reached that point, it's hard to rein myself in from going hog-wild about research, exploration, and spell casting. But I have tried reminding myself too, that this is a lifestyle choice for me, and so I will have the rest of my life to research, watch, read, and practice, and it doesn't all have to be done at once. And let's be honest, if I go hog-wild now, it could lead to burn out very quickly, and no one wants that.

So yes, Bealtaine was about taking something back, and owning it, embodying it. What was the deeper meaning of your Bealtaine? What did you focus on and achieve? Where do you hope this energy will take you when you reach Samhain?