Dogma in The Craft

I don't know about you guys, but when I first discovered witch craft at the age of 12, I was already so done with the dogma of my Catholic upbringing. I hated being told exactly what to think. I hated the idea that the only rules I could follow were the ones that God set down for us. I  hated that my idea of what was "good" and what Catholicism thought was "good" didn't always match up. When my mom stopped making me go to church, I was over joyed. I felt free, and when I picked up a copy of Candlelight Spells a few weeks later, I was hooked for life.

I didn't drop anchor at Wicca. It was an appealing religion on many levels, but a lot of the "rules" that Wicca had didn't quite match up with what I believed, or wanted to do. The idea of working in a coven, for instance, was something that I pursued for a long time because I felt that I had to. When I finally gave myself permission to practice as a solitary, it was a relief. But then, it brought along a whole new set of questions and problems. 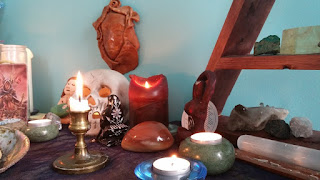 That freedom also made me feel confused, and it was scary. I was afraid that I was going to "do" it wrong. I was afraid that things weren't right if I wasn't casting a circle like the witches in the books told me to do it. Or if I felt a different connection to deity during a sabbat, or goddess forbid, didn't LIKE or want to celebrate a certain sabbat. What if I didn't connect with calling in the quarter or cardinal directions? What if my altar didn't face east, contain a representation of every element? What if I couldn't find my matron and patron deity? What if they were from different pantheons? What if I didn't settle into a certain TYPE of witch craft? Being a solitary was simultaneously freeing, and stress-inducing.

Over the years, I've watched a lot of witches on YouTube, and read a number of blog posts. And the best piece of advice that I ever got was on not following along with the witchy dogma. As soon as I heard that phrase, I was free from all my worry. After all, hadn't I escaped Catholicism for this very reason, because I hated being told what to believe?

Witches don't have a spiritual text that tells them what to believe, and how to practice. We have plenty of people who post or publish their own flavor of The Craft, but none of their books (not even The Witch's Bible) is the be-all, end-all. They are all personal, or coven-based takes on what is, at least now, a very open-to-interpretation religion. One size really doesn't fit all when it comes to paganism. I know that's why so many people find it overwhelming when they first discover it. But don't like the huge pile of books, blogs, and videos turn you off, or send your spinner in wild circles like a compass point exposed to a magnet... Break free of dogma. When something sounds like it's not going to work for you, toss it. When you feel pressured to follow rules or guidelines by someone, walk away, or turn off the video. When you feel guided to cast a circle or create sacred space a certain way, then follow that instinct.

Collect your practices responsibly, of course, make sure that you truly research and understand the method that you are wanting to use (if you are pulling it from somewhere) and feel that you get the impetus behind it culturally, but don't hesitate to incorporate something because you like it. I know plenty of witches who work with Mother Mary in their craft, and there are loads of witches who don't work with deity at all. Some people are casting circles to create sacred space the way they learned from Cunningham 20 years ago. Some people are using their own invented methods, tools, and words.

So ditch the dogma, do your research, and follow your gut. There are no Pagan Police, deity isn't going to open up the skies and strike you down with lightning if you forget to carve a doorway in your circle if you have to leave it suddenly, and nothing bad is going to happen to you if you decide to improvise your ingredients for a spell instead of following the one from the book to the letter. Have FUN with your craft.. it's called The Craft for a reason - so you can be CREATIVE!