For all that I love to write, lately, when it has come to putting fingers to keys to write a post for this blog, I just haven't been able to make myself do it with any real vigor or regularity. I've told myself in the past that it was because I was busy - I'm a mom of three after all, and my youngest is a potty training toddler (more on that in a minute), and I also hold down a part time job, and both my older kids do a sport or activity or two, and I volunteer with one of those activities. But if I am being really honest with myself, this is purely an excuse; I'm home with little Emelie all day most days, and I am definitely able to accommodate time for writing a blog post once a week, no matter how busy my family's schedule is. No, the truth, if I really dig down deep for it, is I'm suffering from a major bout of "impostor syndrome," and writing tends to bring out the truth in me, something that I have been avoiding if I don't want to be "found out."

I think the biggest reason for feeling impostor syndrome at this moment in time, is my lack of success potty training my daughter Emelie. At about 21 months of age she showed an interest in using the toilet, so we got her her own potty to put where she plays the most. It worked like a charm! Within minutes of bringing it home, she had already used her potty for a #1, and it was easy to convince her to go one step further and deposit her #2's there too. After just a couple of weeks, we had a rock star of a kid using the potty, and we figured by the end of that month or the next, diapers would be for bedtime only. 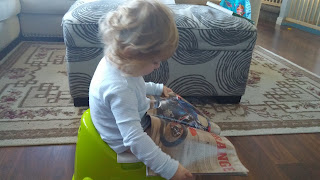 We're not really sure what happened to change the momentum, but suddenly she wasn't interested in using the potty at all. We tried our best to keep the motivation up with stickers, treats, and cheering, but she was truly bored of all that potty stuff, and she started peeing in her pants or on the floor, or on the carpet, couch, or the bath mats on a regular basis, sometimes literally just steps away from the potty. As you can imagine, I became very frustrated, and it's been a sore spot for me for a few months now. Andrew, my son, was pretty quick to potty train, he had it down pat within the span of a month or so, though he started a little later than her at it. But once he caught on to the concept, he wasn't going to let go of it. Emelie, its seemed, just didn't really care anymore.

Now, I'm not exactly a quitter - stubborn runs in my family in a big way, and I've often said to my kids they might as well to not bother fighting with me once I've made up my mind because I have more practice at being stubborn than them. I've been despairing for the last month or so about our lack of progress in toilet training, but this past weekend, I decided that I really needed to pull myself out of my funk, and buckle down to it again. It might have been the fact that I realized we are coming up on 6 months since she first started to potty train, or it might have been the fact that last Wednesday she had 3 separate poop accidents, the last one taking place 7 minutes before I needed to go to work, and it was all over the floor, her, the toy box, and then, eventually, my work uniform. I decided that I was FED UP with this shit - literally!!! - and that I needed to try something new.

So I got up early this morning, and decided to hit up good old Google for some suggestions. Revamping our ideas about how to approach potty training seemed like a good idea, and we've been mostly successful so far today. The use of an egg timer, bringing the sticker charts back out, and celebrating even the shortest of tries has helped to get Emelie's motivation back up. She did have one accident, but I will admit that that was partly my fault, because I failed to stay on top of the schedule I'd set with the egg-timer, and we were about 15 minutes overdue for a try. I was fiddling with my phone and zoning out, and I should have been paying attention to her. Oh well, we live, we learn, right? 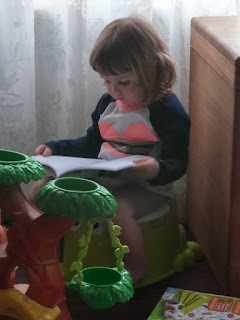 It occurred to me as I was cleaning her up that I could take a little of my own advice, in regards to this blog. It's been easy to me to come up with excuses and procrastinate, but when it comes right down to it, the only thing that's holding me back from writing is... me. I've allowed myself to stay in this funk, and it's me who's decided to let myself wallow in impostor syndrome for a few months. It's me who decided to put off the serious potty training revamp for a week, then another week, then until after this illness, or after I get over my own illness, or whatever the excuse of the moment has been. So I decided that I was going to shut up, and DO something about it.

I've been following Emelie around the house today, her froggie potty and the egg timer are constant companions. Everytime the buzzer goes off we yell "potty time!" and rush for the potty. Sometimes she sits for a few seconds and declares that she is done, and other times she sits for longer, and we celebrate another successful trip to the potty. But the best thing about this process is that I'm spending more time WITH Emelie, closely in her proximity, watching how she plays, or watches her cartoons, or pets our dog Tux. She re-iterated my lesson several times to me this morning - when what you are doing isn't work anymore, try something new. So, she has her constant companion objects with her, and I have mine - my laptop, open to this draft. Everytime I think of a few lines, I write them down. I'm not waiting for the right moment to sit down and write anymore, I'm just writing. And when I want to work on my latest sock pattern instead, I put the laptop down, and pick my knitting up. Or help my daughter to the potty, or type up a reading for a client. But I'm not putting it off anymore, I'm bringing the tools I need to get the job done WITH me, and it's working.

So, instead of beating yourself with another stick, instead of telling yourself that you're a failure because you couldn't get over procrastination yet again, shake things up, and try attacking it from a new angle. The problem may not lie in you, maybe it's just your approach.

Until next time, love bugs. <3
Jess 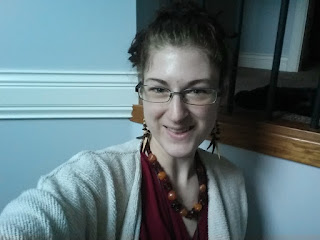