Every book on Wicca or Witchcraft worth it's weight in salt, will always mention, if not list, a variety of deities to work with during certain sabbats, or times of the year. How many of us have celebrated Ostara by dedicating our ritual to Eostre? Or Lughnasadh to Lugh. Or Imbolc to Brighit. There's the Holly King and Oak King for the Summer and Winter Solstices, and Samhain has such a variety of goddesses to choose from that it's staggering. But for those of us who work with a dedicated deity(ies), it can be difficult to structure a ritual that celebrates the return of the light, or the zenith of the sun's strength with a god or goddess that primarily is associated with the darker half of the year. 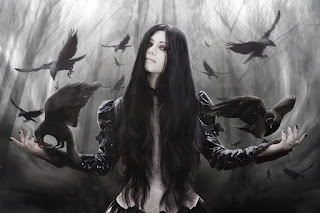 I think we all know, deep down, that you can find darkness in light, and light in darkness. Certainly, those of us who work with tarot are familiar with the concepts of "upright" and "reversed" cards, the direction the card is indicates whether it's supposed to be a positive or negative version of that card (I use the terms positive and negative purely to illustrate a point. I don't believe any of the tarot is purely either of those energies). The same is certainly true about dark goddesses. Most of them have motherly or life-giving qualities to them as well. Kali is a mother goddess, as is The Morrighan, and Hel acts as a guide to souls. Freya is a goddess of war and is a death goddess, but she's also a mother herself, and Cerridwen's magic brew was intended for her son, which she was tending day and night. Nothing in our world is truly black and white, it is a selection of shades of gray when you look closely enough. The same is true about the deities we work with. 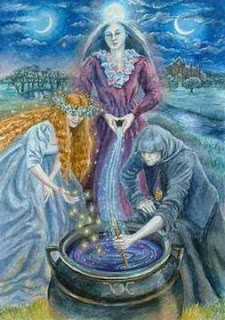 It seems like every year for me, it's an easy, seamless process to create ritual that is deep, meaningful, and full of heart at Mabon, Samhain, and Yule. Imbolc is hit or miss for me, it can either be brilliant, or boring as fuck. But by the time it rolls around to Ostara, Beltane, and the rest up to Mabon, I find that even though I'm filled with joy to see the world greening, dig around in my garden and see flowers, birds, and leafy trees again, my rituals seem to lack the same kind of intense feeling that I feel during the dark half of the year. It hit me a short while ago that the reason for my disinterest in these sabbats is my disinterest in working with the suggested deity of that sabbat. I'm not a child of Lugh, or Eostre, or Cerridwen. I'm a daughter of The Morrigan... so, why was I trying so hard to fit myself into a deity mold for half the sabbats that I knew I didn't fit?

The reason? The same one that explains why I've tried to cling to various trends over the years. A sense of belonging. Of community. Of acceptance. Its what drives so many of us to do so many things, both reasonable, and not, every single day. Its when we really stop to examine the reason why we feel so driven to fit in in a particular situation that we can come up with spiritual gold; oh yes, you know where this is going. Shadow work.

Fitting in is something I've never really succeeded in for pretty much my entire life, and when I was younger this fact bothered me a lot. I tried desperately all through grade and high school to try to fit in, changing my clothes with the fashion trends, trying to change the people who taunted me over to people who would seamlessly accept me into their group. I didn't fit in with my family either - I didn't share the same beliefs, personality traits, interests, or anything, really. The only thing I shared with my family was my DNA. My circle of friends has always been small, and most of the friends don't know the other individuals very well, because I've acquired them from a variety of places, like high school friends, an old coworker, internet meet-ups, and through my spouse. Whenever I try to get some of these people together it either goes really, really well, or it's awkward as hell.

So, I think when I realized all those years ago that I was indeed pagan, that feeling that I had found my home was so welcome, so long time in coming, that I was ready to abandon some of my individuality in order to full integrate that sense of belonging. I wanted to feel that strong bond with other pagans and witches so badly that I ignored what wasn't really working for me in order to maintain my bond and connection with them. For some people, the name of the deity doesn't really matter, they change the god or goddess's face with every season because for them, it's the divine feminine or masculine behind it that they're really celebrating. But I have a hard time with that, because each aspect of the divine feminine or masculine has a different energy signature, a different feeling, and when I finally stopped running from The Morrigan, that particular energy grabbed me so completely that I just don't want to work with any other deities right now. She's pulled me in so completely.

So this year, as usual, Ostara came and went, and I barely acknowledged it, except with a change of decorations on my altar. Same with Beltane. I switched things up on my altar, and it matched what was going on outside quite well, but it didn't match what was going on my heart. I've never held to the traditional set up of a witch's altar, not even when I was first starting out, but I've realized that lately my altars haven't been as expressive as they were, say, this time last year. Was there something that I was ignoring, or resisting? 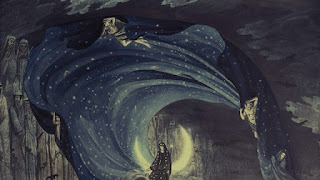 Of course there was. Now, what caused me to want to belong amongst my fellow pagans is personal, and I won't be sharing that tidbit on this blog, at least, not yet. But the concept is something we can all learn from; how much of your personal practice do you mold to fit into certain accepted or popular pagan/witch practices? Maybe you have started a crystal collection, even though rocks really aren't your thing. Or maybe you've got an athame on your altar that you never use, and bought purely because Scott Cunningham told you it was one of the essential tools. Or maybe, you don't work with your favorite deity as much during the light half of the year because she's a "dark" goddess, and it's not her time (hint: that one I'm guilty of). Whatever it is that has been holding you back from expanding deeper into your practice, I'm inviting you now, to see if you can't break that particular cage. What's the worst that could happen if you start making your practice more yours, tailored to what fuels your heart and soul?

Personally, I think that the worst that can happen is you'll find out that you didn't love it the way you thought you would, and you'll return to doing things how you were before. But when it comes to taking a leap of faith and launching into a new spiritual practice, I find that the best question to ask myself is "What's the best that can happen?" Because the answer to that is a more profound relationship with your deity of choice, Or a better understanding of yourself as a person, your own path, or at least be more knowledgeable of the type of path that isn't right for you.

So, go ahead. Work with Amaterasu on Samhain Eve. Or Freya on Litha Work with the many shades of gray that either god or goddess has. Work with those many shades of gray, and discover both the light and dark aspects of the deities that call to you. Work with them every day, or only on certain days. The choice is up to you. But don't deny those urges that you have, even if its the "wrong" season to work with that deity. Your intuition may be guiding you towards one of the greatest journeys of your life, and who knows what you could be missing if you turn away from it, just to fit in.