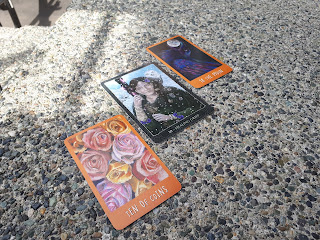 Open almost any book on tarot cards, or scan through almost any tarot blogger's blog, and you'll find a million people backing the practice of doing daily draws to learn more about your tarot deck, and connect with it's energies better. And I am certainly one of those people who advocates this practice - if it resonates with you. But all too often lately I have found myself not at all inclined to do a daily draw with any of my decks, preferring instead to read my own cards only when I'm called to do so.

I think the reason for this is because by this point, I'm very well versed in what the standard meanings of the 78 cards are, both for me, and for a broader audience. I'm an intuitive reader, and so that means I often pick up non-traditional meanings and interpretations for people when I'm giving them readings. Sometimes these weave in and flow with traditional card meanings quite well. Sometimes, these meanings are quite different from what you'd normally associate with the card, and while it can be confusing for some people, it's almost inevitably helpful for my clients. But lately, when I have gone to do daily draws for myself, I've gotten nothing but crickets. What in the world was going on?

I realized pretty quickly what was happening was that I was over-saturating myself with tarot readings. Sometimes my daily draws were meant to last for a few days, a week, even two, before I could move on to another reading. The information from the previous reading was still being processed, so the new readings were literally not sinking in, or, they were almost direct repeats of previous readings. So, I've started a new practice, following the lead my intuition is giving me, by pulling three cards, usually two tarot and an oracle but not always, and photographing them, or leaving them out for a few days in a sacred spot, and reflecting on them every day, waiting while all the various messages and wisdom sinks in and is processed before drawing new cards. 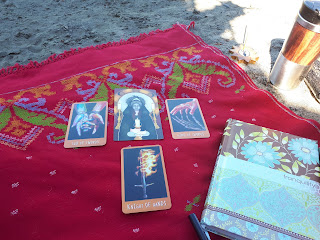 I'm really loving the Raven's Prophecy tarot lately too. I've had it for a couple of months now, but between moving and mom's death and school starting soon, I've only recently pulled it out and started working with it. And it's a beaut. The Earth Wisdom Oracle has become another fast favorite of mine as well. It's ripe with witchy imagery and symbolism, and the realistic looking artwork really turns my crank too. I've been trying to sit with my cards every day for a few minutes of silence - not necessarily meditation, just silence - to see if any messages come through, or, at the very least, to ground myself. Meditation is where I try to go in deeper, and this more passive way of letting things gently come to me while I tune the world out a little bit is softer, easier to do, makes me feel a lot less pressure, and it's working really well with the hectic life I've got going on right now.

Now, I'm not saying there is anything wrong with doing a daily draw of one card, or several cards, but it's making for an interesting change for me. I still think doing daily draws is a great practice. But I also think that we as a tarot community, need to open ourselves up to different ways to read for ourselves and use our decks. What works for one may not always work for all.

I hope this little bit of sharing was helpful for you guys. <3
-Jess