One of the highest compliments that I think I was ever paid was by my grandmother, 9 years ago, when I left my abusive ex-husband and began divorce proceedings. My parents had had to literally come and rescue me, as I was in another country, had no money of my own, no car, and no way to help myself out. I was being emotionally and psychologically abused, and it was starting to progress towards physical abuse as well, and I was terrified of my husband. I was terrified to go, but the only thing that scared me more than that was staying with him. And so, while he was a few hours away on a business trip, I packed my most important belongings and loaded them into my dad's Nissan Altima. We stayed in a hotel that night, and the next day I was back in my own country, living with my parents again and sleeping on the futon bed in the spare room. I talked to my grandmother the day after I arrived, and she said to me:

"Jessica, you're strong. You're like a cat, you always seem to land on your feet again." I don't remember the rest of what she said to me, but it probably was along the lines of I was doing the right thing, and it was hard, but it would be worth it in the end, wasn't I grateful I hadn't had kids with him, and she was so grateful I was home safe in my own country once again. But that one line was all she had to say to lift my spirits and give me the reminder I needed to believe in myself again. Once I left my ex-husband I was a shell of who I had been. No longer a vibrant, passionate person with a zest for life, I was quite, shy, and scared of asking anyone for anything, ever. This conversation with my grandmother began a healing process that changed my life, and gave me the ability to keep on fighting through what would be 8 months of trying not to sink to my ex's level, pick fights, or make cruel remarks.

It hadn't really occurred to me until that moment that I could even be considered a strong person. I had always thought of my life as an example of how I was defined by my flaws. Depression and anxiety meant that I was too sensitive and overly dramatic and couldn't cope easily. Getting married young and divorcing young showed how I was too impulsive and passionate, and susceptible to making poor choices. Needing to be rescued by my parents proved that I wasn't mature or independent enough. I could go on and on with examples, but I think you get the picture. I saw my life as proof that I was a failure, whereas my grandmother had seen my life experiences as obstacles that I had, or was overcoming, and providing me with valuable lessons that I could carry into the rest of my life. 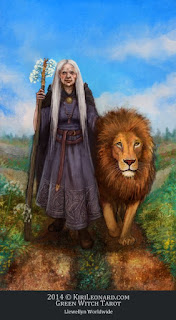 But now, Strength is one of the cards that I identify with the most in the deck. I have become quite emotionally strong after enduring the things that I have in my life. I have learned how to work with my demons, and when challenges arise I more often than not am able to think to myself that I'll get through it, rather than fearing how I'll get through it. The how isn't the thing that worries me anymore, because I've learned how to trust in my ability to cope.

The last three months since I've lost my mother-in-law has probably been the most difficult thing I've ever had to go through. This includes the severe depression that I had as a teenager, and the abusive relationship, separation and divorce. This definitely includes going through child birth and the difficult pregnancy that I had with my youngest child, Emelie. The ripple effect her death has had on our family has been far-reaching, and not just because I notice the absence of such an important person in my life, but because with it has come a slough of paperwork, sorting through of personal items, coming across photos and memories that have broken over the grief wound afresh, and the questions about death and the process of it my children ask me about from time to time.

Obviously if I had a chance to have Mom back in my life I would take it in a heartbeat, but at the same time, losing her has shown me what I am capable of handling and dealing with. It's increased my capacity to love and understand the grieving process and what that can look like for other people. It's made me sensitive to the feelings of others, and I've learned some new skills for dealing with people during difficult times, and with touchy subject material. I feel like this experience has changed me, and made me grow, and while I don't like the circumstances this growth has occurred in, I'm grateful for it nonetheless. 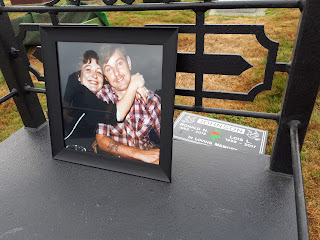 I think what I'm really grateful for though, is that this has brought my husbands siblings and us closer together. Yes, there's been some difficulties, but for the most part it's only gotten better. My nieces and nephews know each other all much better now, and I've gotten to get close to them too. 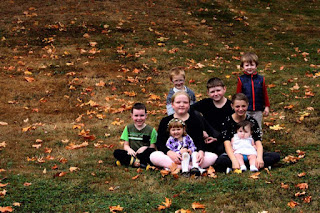 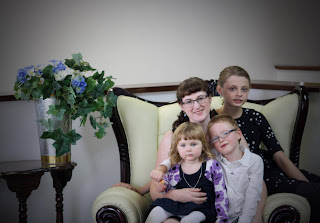 Now that the funeral is behind us, I've been able to be more productive in getting moved and settled into our new place. I think the part I love about living here the most is the covered balcony and pretty private back yard with the weeping willow in the back, that I've nicknamed "Grandmother Willow" after the character in Pochahontus. I did a video the other day talking about the decks I'm working with for the fall, and I recorded it on that deck in the middle of a rainstorm, so you get to hear the beautiful noise of rain falling on the roof in the background. Click below to watch it. <3

I hope that you've enjoyed these musings on "becoming" a strong person. In my opinion, everyone is strong, and we all deal with things differently, and falling apart, crying, and showing your stress is no indication of how strong you are emotionally. But learning to recognize my own strength was part of the journey too, and how I've continued to be able to identify with it, even when I've reacted to some things in a way that some people wouldn't necessarily call "strong." I hope it's reminded you of your own strength, and the lessons you've learned in the process. If you have any thoughts on strength, I'd love to hear about them in the comments below. <3