When Tarot Cards "Stalk" You

We've all experienced it... you sit down, pull up a deck of your favorite tarot cards, and start to shuffle. You're ready to receive a message, you're ready to see what the Divine has to say to you today. The cards slide between your hands, mixing over and over again, and then suddenly, you feel called to stop, and pull a card, or one flies out of the deck, grabbing your attention because it's THE CARD for today. You turn it over, and...

It's the same. Damned. Card. You. Had. Yesterday. And the day before, or earlier this week. Or just pulled basically the equivalent card from another deck.


Yup.. Tarot Card Stalkers. Tricky little blighters to deal with, aren't they? But as annoying as they can be to deal with, they serve a purpose. Chances are, you're ignoring something, a message you would rather not be true, or a situation you're hoping will just blow over if you give it enough time. As tempting as it can be to blame the return of that card on lazy shuffling, an accident, or the card being "sticky" from being handled so recently, the fact is, you probably already know that you need to really take a few minutes to process what this card is trying to tell you.

Sometimes stalker cards come up because we're dealing with a situation that takes a long time to get through. Processes of big transformation and change don't happen like lightning, they are weeks, or months, sometimes even years in the making. Stalker cards can come up as a reminder to you that you're still in it, to be patient, to really be present in the moment, and not try to rush  your way through it. 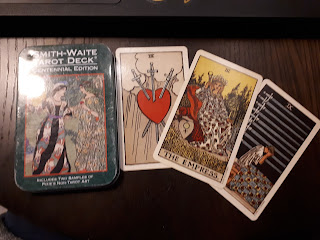 And then other times, stalker cards are there because we keep ignoring the messages that have been coming up. We don't want to face a difficult situation, or admit the truth to ourselves. But honeybees, what we resist, persists. It's advice we've probably all given to other people, but rarely taken for ourselves. Running away from the truth, from what you know you need to deal with is counter productive, and isn't going to get you anywhere pleasant - in some cases, it can even make things worse. I invite you now, if you've been groaning every time you turn your stalker card over, to really think about what it means for you, and what it's calling you to do.

Recently my stalker card finally prompted me to action that really sucked to do. I can't (and won't) go into details, but I had to confront a person who was claiming to be my friend, but whose actions were clearly indicating that he didn't really care about anyone but himself. It was only when I walked away, hurt, and frustrated beyond measure that he indicated he really wanted to make it up to me, but then back-pedaled a couple days later when I tried to talk to him about it again. Confronting the situation we were in made me realize what my stalker card had been trying to tell me all along - pull out of any emotional connection and sharing with this guy, and NOW. Had I really listened to the message this card had been trying to communicate to me, I would have saved myself the recent pain of this realization. To know I had lost a friendship, through no fault of my own, but because that person really wasn't interested in being a friend anymore.

I'm grieving the loss of this friendship, this betrayal of my heart. It's a painful situation, especially since I currently have to see this person on a regular basis. I'm not completely over the shock of this loss (because let's face it, I did what so many of us do when we realize we might lose something... we bury our heads in the sand), but I am over the worst of it. I've realized how trust worthy my intuition really is, and how much I was trying to be my own advocate, even though I didn't realize it at the time.

So... next time your stalker card comes up, what are you going to do? Ostrich? Or give it the attention that it deserves? Bright blessings to all of you,