A lesson in focus.

Yesterday was quite an adventurous day for me, as I was going to go with my best friend to visit her grandmother, who has a bad case of dementia and requires round the clock care. She lives in a Province-run senior's care facility, which is big, beautiful, and has lots of amenities and entertainment for it's occupants. I took my youngest daughter Emelie along, and we hit the road. We were driving along the highway, all of us girls, and Bree and I were talking about bald eagles. They are easy to spot this time of year as the trees are bare, and just then one swooped down in front of our car, it's wings spread out fully. It was stunning.

Until a second later it lost control and literally smacked off the top of my windshield and the roof of my car.

I'll let that sink in for a moment. I hit a bald eagle in flight with my car.

I screamed, no joke, and Bree thankfully turned around and let me know that she could see the eagle on the grass beside the highway, wings outspread hopping around. It appeared to be okay, though shaken. Hell, I was shaken, and I hadn't even taken the hit!

We drove on. The visit with her grandmother went well, and bringing a toddler turned out to be the highlight of the entire unit's day. Emelie was her usual cheery, energetic self, and she had several of the seniors up, walking towards us curiously, dancing, even jogging! Her bright smile and happy energy were apparently what the unit needed, and I was delighted to see her coming out of her shell minute by minute and engaging with several of them. Next up was Costco - a necessary evil when you have three kids - and that too went along as per usual. Emelie was a bit impatient to get out of the grocery cart (this kid doesn't like to be penned up for long!), but by the time we hit the road again she was fed, she was entertained, and we were all ready to get back home.

I couldn't shake the feeling that that eagle hitting my windshield was a message from spirit. Eagle had medicine for me in that moment, there was just no rational way to explain how it went from soaring gracefully over the cars to suddenly bouncing off my windshield. It wasn't windy, it wasn't impacted by another bird or bit of debris, and it had been flying freely over the tops of the previous vehicles. So, what did eagle want me to know that day? 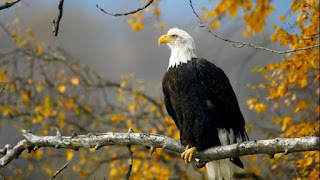 I decided to sleep on it, and this morning when I woke up it was one of the first things that I thought about. Still mystified, I decided to message my friend and modern shaman, Lola Pickett (https://wildplayground.com/) and see what she had to say. She read my message and replied just a few minutes later.

It was about focus. The eagle had been gliding perfectly, then suddenly was careening into my car. An experienced, fully grown bald eagle shouldn't have lost control that quickly, unless it had lost it's focus. This was a wake-up call for me, to get back on the right track, stop making excuses as to why I wasn't spending as much time at the altar lately, or making those offerings to The Morrigan that I wanted to make, and that I always intended to do, but never quite got around to. I was in danger of becoming that eagle, skidding out of control, with the bruises to show for it to, if I didn't wake up and pay attention.

As soon as she said this, that light bulb of knowing went off in my head. She was right, and the answer was blindingly simple and easy to see that I was wondering why I hadn't figured it out before myself. But no matter which way I arrived at the answer, I was here at last, and it was crystal clear that I needed to get my act together. So you can bet that I was at my altar this morning, making an offering (or two). I took that time to admire the regal, and stationary, eagle that I saw in the tree while out running errands this afternoon. And you can bet that I put my nose back to the grindstone when it came to working with the Morrigan by picking up a book about working with her and other dark goddesses by Stephanie Woodfield today.

So, what are you procrastinating on? Where have you lost focus recently that you need to pay attention to again? Tell me in the comments below.