For this week's Witchcrafting Wednesday I decided to do something I don't do very often... bake! My husband is the baker in the family, he loves to get out the measuring cups, level things off, and bake things for precise periods of time at precise temperatures and conditions. I'm typically more the slap-dash type of cook myself, preferring to work from a recipe "theory" and go from there. But once in awhile I do get the urge to bake things, especially around this time of year when some of my favorite flavors are popular. Cranberries and oranges are my favorite fall flavors, along with apples and warming spices like cinnamon, nutmeg, ginger, and cloves. I selected 3 recipes that are fall or Samhain specific, and decided to give them a shot!

If you'd like to see the video, then please go here. Otherwise, the rest of this post is simply a link to the recipes I used, and any notes I have about making them.

Cranberry Orange Muffins:
I got the recipe from here: https://www.geniuskitchen.com/recipe/cranberry-orange-muffins-139499

The only changes I needed to make were to add an additional egg as the batter wasn't wet enough, and I added more cranberries than they suggested, more like a heaping cup of them, as I really love cranberries! If you are going to use freshly squeezed orange juice like I did, then make sure you have 3 oranges to hand. Otherwise they baked up really nicely indeed, and the whole family loves them!

Lamb's Wool:
I can't find the same version of this recipe that I found in the little Samhain book published by Llewellyn, so I'll write the recipe here:

I chose to use a lager instead of a light ale, because I worried that the spices would take over the beer taste, and I wanted it to be detectable. I chose a crisp cider, nothing too sweet, and the brand I used was Angry Orchard. Here's where I went wrong. I used freshly ground cloves, and they totally overpowered the mixture. Once you add all the ingredients into a saucepan and stir the spices release their oils, but then sit on the surface of the liquid as you heat it, or sink to the bottom. What I will do next time, and I will make it again for Samhain, is to add a cinnamon stick and some whole cloves to a teabag (like the kind I used to strain it) and steep them as the mixture simmers, rather than adding them directly to the liquids. Other than being overpowered by cloves the drink was good!

Preheat oven to 400 degrees Farenheit. Combine flour and spices in a small bowl, then cream sugar and butter in a separate bowl. Add egg yolks and mix until incorporated, then add dry ingredients and mix until crumbly (recommend mixing with electric mixture). Add dried fruit, stir to incorporate, then slowly add milk to mixture while mixing on medium until soft dough forms.

Flour a clean, flat surface, knead dough if needed, and then roll into a log shape, roughly 1.5-2 inches in diameter. Cut into 1/2 inch rounds and lay on parment paper covered cookie sheet. Brush surface of cookies with beaten egg, and bake for 15-20 minutes, or until golden brown. Transfer to cooling rack and let cool before enjoying.

These cookies are sooooo good, and I intend to freeze the majority of them for Samhain itself (or bake another batch, I haven't decided which, yet!). If I were to tweak the recipe at all, I would maybe half the granulated sugar and add the same amount of brown sugar, to change the color of the cookies and give the a bit of depth, and maybe include 1/4 tsp of ground ginger and 1/4 tsp of allspice or cardamon into the dough for a bit more of those warm autumn flavors. I think you could do these cookies with dried apples too, as long as you chopped them into small pieces first.

All in all, I was really impressed with how these recipes turned out, and I would make all of them again! What are you favorite Samhain recipes? Let me know in the comments here, or under the video! 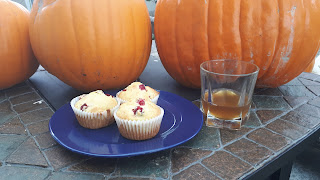